The Issue of Global Oxygen Generation During COVID-19 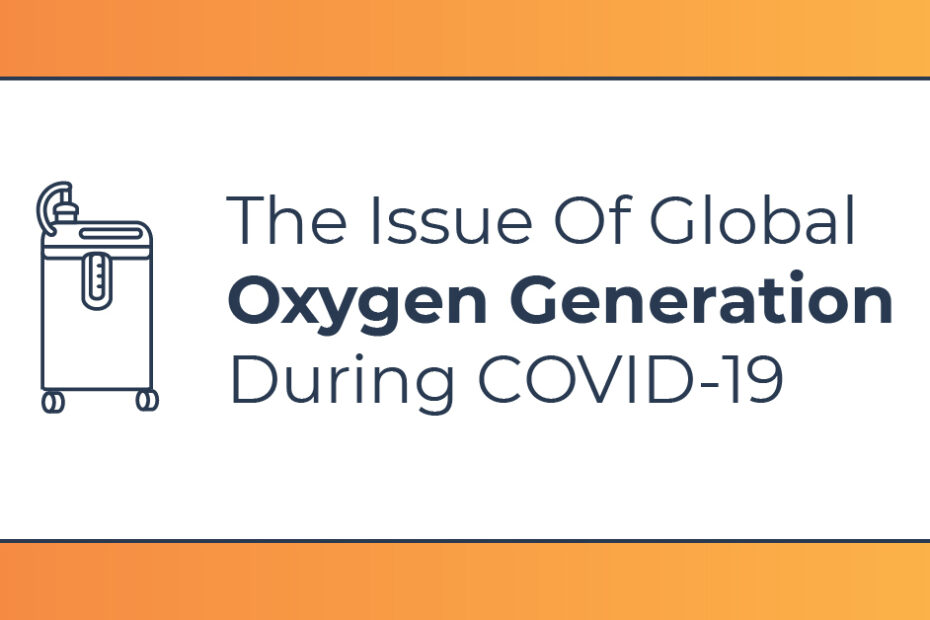 As COVID-19 circumvents the world with currently 287,000 new cases per day (2 million per week) as of October 1, 2020, an ongoing issue remains largely unresolved: oxygen shortages. COVID attacks the lungs and reduces breathing capacity; patients with a severe or critical prognosis require supplemental oxygen to stay alive. While many of us are aware of this need, the scale of the problem is massive.

The Scale of the Oxygen Problem

A COVID patient requires 10L of Oxygen per minute in the severe stage, and 30L of Oxygen per minute in the critical stage (usually at the stage of invasive ventilation). Extrapolating the June 6 WHO estimate based on 2 million infections per week, COVID creates an added demand of 1.2 Billion Liters of Medical Oxygen gas per day, an added 60+% load on the system. In early June, when shortages already happened in multiple countries, this figure was half of what it is now.

The current problem of Oxygen availability is multi-fold; generation is at the base of the issue (not enough plants and concentrators), followed by distribution and efficiency in medical usage.  The global optimal need of concentrated medical O2 was estimated at 10 Billion L per day; the likely real usage was closer to 2 Billion Liters 02, pre-COVID. Source: PATH / OSMS Estimate

At OSMS, we have surveyed and analyzed the problem in multiple countries across the globe. We have made our ongoing research freely available (current version: 1.0) in order to help individuals and organizations understand the scale of the issue and give insights on ongoing solution approaches. The document includes issue analysis, industrial analysis, calculators that help estimate the scale of the problem on a national level, and ongoing solution pathways.

Cost of Generating Oxygen by Method

Most large, efficient hospital systems use delivered liquid oxygen that can be stored in large tanks on-site, but this requires a developed industry.  Here is a cost comparison of existing solutions:

Personal concentrators surprisingly offer the best price per Liter of Oxygen generated. They are in hospital emergency use already, but it remains to be seen how efficient these machines will be in a real-world environment with many patients needing oxygen simultaneously. The WHO warns that personal concentrators have both maintenance and output issues.

The issue of generating oxygen has existed since at least March 2020; the solutions have been multi-fold but potentially catastrophic shortages are still being experienced, particularly in developing countries. There are 3 primary pathways to solving the issue, and they’ll likely need to be employed simultaneously. Two of them are industrial in scale (meaning, they require large financial resources for implementation), one of them is grassroots in scale and can be adopted by the maker movement.

With advanced technology, it is possible to generate liquid oxygen at -183°C, which allows for much faster transport but sharply increases maintenance needs and requirements for highly trained engineers, as well as cooling infrastructure. Liquid oxygen plants are a large financial investment and require extensive construction; a medium-size cryogenic plant can cost $60 million to set up.
So, a viable shorter-term solution during COVID-19 is to divert existing production capability to the medical sector.

It is important to note that oxygen shortage is not just a “developing world issue, according to the CEO of Novair: “We are seeing that oxygen supply is becoming a matter of general concern. In developed countries, despite the large existing capacities, the system for delivering liquid oxygen and bottles has reached its limits. We are informed that there is a lack of medical oxygen in some places, and we are requested to supply oxygen generators to hospitals to support the existing oxygen source.”

While this LOx is meant for industrial purposes, its high level of purity makes it likely to be useable in a medical context; many industrial LOx plants around the world have committed to reserve 10-30% of output for COVID  fighting purposes.
In terms of large-scale international aid, one method could be to buy LOx in bulk and ship it to countries in need – which is already happening to some degree.

2. Purchase and Installation of PSA Plants

Pressure Swing Absorption is the most flexible process of producing medical-grade oxygen. These plants can be purchased and deployed within a few weeks and signify an ongoing investment in oxygen infrastructure. Multiple governments around the world have invested to the tune of $5-20 million to expand their oxygen production capability this way, with the rationale that even once COVID has been dealt with, these machines will help fight pneumonia and other respiratory diseases that were under-supplied with oxygen before the pandemic began.

One medium scale PSA plant produces between 2-190m3 of oxygen per hour (that is, 48-4,500m3/day) and weigh about 1.5-20 tons each. For example, a Peruvian PSA plant purchased to fight the COVID shortage produced 25m3/hour, and cost approx. $300,000 for purchase and installation. Smaller HVO (High Volume Oxygen) machines cost $45,000 per unit, $450/month in power and maintenance, and can produce 120 Liters per Minute. Installation lead time for a skid-mounted PSA is now down to close to 2 weeks in the developed world.

Personal Oxygen Concentrators are semi-mobile units that can generate up to 15 liters per minute; enough for a severe patient but at least two parallel units would be required to supply a critical patient who requires an average of 30 liters per minute.

Despite being the smallest scale solution, personal concentrators surprisingly offer the best price per Liter of Oxygen generated in a short term basis as per our analysis above. They are in hospital emergency use already, but it remains to be seen how efficient these machines will be in a real-world environment with many patients needing oxygen simultaneously. The WHO warns that personal concentrators have maintenance and output issues. While units are available commercially for approx. $1,500 for a 10 liters per minute machine, multiple open source projects are underway.

The currently most promising low cost solution is OxiKit, a DIY Open Source Oxygen Concentrator that can potentially generate 15L/minute. Testing and related designs are underway by multiple groups, including COSMIC Medical in Canada.

What Makers Can Do

The future is uncertain. What we do know is that the issue will likely persist well into 2021 if the pandemic continues to take its current course. Makers can engage in the following ways to help create a stopgap for the issue until governments and NGOs have tackled the problem on an industrial scale.

This site uses Akismet to reduce spam. Learn how your comment data is processed.

OSMS informs and empowers makers, engineers, manufacturers, local organizers, experts, and institutions around the world working in their communities to meet supply challenges during global crises.