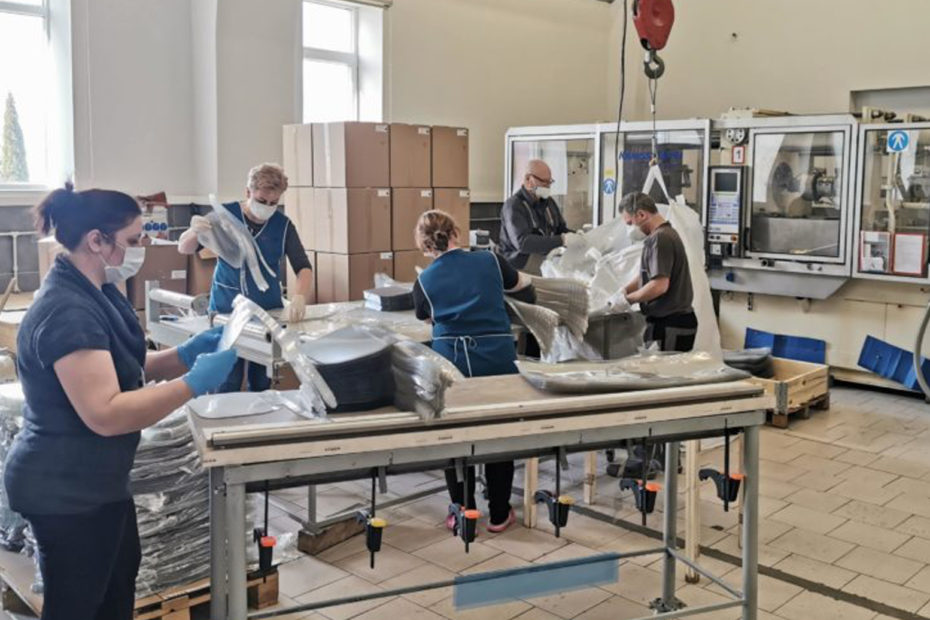 As of today (May 19, 2020), Lithuania has had 59 deaths from COVID-19, out of 1,547 reported cases.  A graph of reported cases shows a steady decline. Furthermore, all hospitals and medical professionals in Lithuania have the personal protective equipment (PPE) that they need—and most of it was made and delivered by non-professional makers, using open-source designs and banding together to grow an organic distribution network that got the equipment where it needed to go. This remarkable success story demonstrates the power of open-source designs and volunteer cooperation, which is exactly what Open Source Medical Supplies (OSMS) has been working on since the pandemic became our global reality in March.

Paulius Briedis is an engineer and teacher with Robotikos Mokykla (Robotics School) of Vilnius, Lithuania. You wouldn’t think that a robotics academy—which according to Briedis began its life as an after-school club—would become the catalyst of a major lifesaving effort, but that’s exactly what happened. It was lucky for Lithuania that Robotikos Mokykla has 23 3D printers and 40 robotic arms. On March 17, Briedis found an open-source design for a face shield, developed in South Korea, on an OSMS Facebook page. Using the school’s facilities he created a prototype and showed it to a local doctor. The doctor showed it to a competing robotics academy which also went to work making shields. Two days later some of Robotikos Mokykla’s students, brainstorming around the design, made some modifications that made it possible to create face shields from a single piece of plastic. Brains and hands—both human and machine—were soon hard at work with a common goal.

The effort received a boost when an influential Lithuanian YouTube star connected the robotics academy to a local company that had laser cutting equipment. When the Lithuanian news media took notice, a plastics factory stepped up and began supplying the materials to make the shields in bulk. The cooperative effort resulted in the manufacture of nearly 70,000 face shields in less than two weeks.

“I’ve been getting a call every 30 seconds,” Briedis said, after the story hit the media. “Even some old friends were calling and started to ask how it’s going, and I have to tell them to state the purpose of the call in 20 seconds or less—and of course they want some shields.”

Robotikos Mokykla shared their design for face shields with doctors in the UK and Switzerland, as well as on GitHub. The idea was to activate as many producers (makerspaces) as possible. One sector that answered the call was, amazingly, libraries. There are 60 libraries in Lithuania who have 3D printers; when they originally got them last year Briedis said many of them regarded the printers as “toys” without much use. The pandemic changed that. Because the open source shield design can be made with very small printers, libraries became small-scale manufacturers, and because of their existing information and book sharing networks, the libraries were able to coordinate distribution of the shields across Lithuania. In doing so, they were, Briedis observed, fulfilling the highest mission of libraries: to share and spread useful knowledge and information.

An information sharing network to distribute the makerspace-created PPE quickly developed in Lithuania. Briedis showed me an interactive real-time map of the country that looked like something you’d see on the wall in a high-tech military war room. The dots and crosses on the screen, instead of representing armies or strike points, were requests for PPE from various hospitals and institutions. The map connected makerspaces to needs for their products—essentially targeting needs and terminating them by delivering locally-manufactured equipment. Indeed, makerspaces began competing with one another to cover as many needs as possible.

A key indicator of the success of the effort was when doctors and hospital departments not considered to be on the “front line” of treating COVID-19 cases directly—for example, radiology departments—were able to post their needs for PPE and have them met quickly. Some of these doctors had been afraid to ask for PPE, for fear they’d be seen as soaking up scarce supplies needed more urgently by front-line health care providers. But Lithuania’s manufacturing and distribution network was so efficient that even these departments got what they wanted. And doctors have been impressed with the quality and integrity of the makerspace-provided equipment.

Robotikos Mokykla isn’t stopping with face shields. They’re now 3D printing adapters for helmets that can serve as alternatives to intubation, a process developed by Lithuanian doctors in Chicago. Because this process, called non-invasive ventilation (NIV), does not require patients to be sedated, it can free up more resources to save more lives in severe cases.

The secret to Lithuania’s success, Briedis said, was communication: the doctors telling makers what they need, and makers telling each other where the supplies need to go. This was not a top-down process. No government has been directing it. Companies aren’t gouging each other. Everyone is cooperating organically.

I was taken by some of the images Briedis showed me: medical workers in a hospital, wearing open-source medical supplies, giving the thumbs up; a worker in a library, wearing a mask, organizing face shields on a small desk, his gloved fingers giving the V-for-victory sign. Lithuania’s story demonstrates the power and potential of open-source medical supplies—when activated by the human qualities of ingenuity and compassion.

This site uses Akismet to reduce spam. Learn how your comment data is processed.

OSMS informs and empowers makers, engineers, manufacturers, local organizers, experts, and institutions around the world working in their communities to meet supply challenges during global crises.